Ukraine and Russia are locked in an information war as well as a deadly struggle on the ground in Soledar, a salt mining town in Ukraine’s eastern Donetsk region, at the end of the 46th week of the war.

The Wagner Group’s mercenaries have been fighting to take Soledar for weeks in an apparent effort to encircle Bakhmut, 10km (four miles) to the south, which has been the focus of Russian offensive operations since September.

Wagner founder Yevgeny Prigozhin announced his forces had succeeded – even as he asserted the battle was continuing.

“Units of the Wagner PMC have taken control of the entire territory of Soledar. A cauldron has been formed in the centre of the city, in which urban battles are being fought,” he said, using a common Russian military term for an enclave of defenders.

“I want to emphasise that no units except for the fighters of the Wagner PMC took part in the assault on Soledar,” Prigozhin said, who has recently highlighted the role of his 50,000 mercenaries over regular army units.

Prigozhin published a photograph of himself allegedly taken in the salt mines of Soledar, standing next to Wagner fighters.

“It seems that the location of Prigozhin does not correspond to reality,” Ukraine’s armed forces said, calling the photo a psychological operation “aimed at the internal audience in order to somehow justify the insane losses among the prisoners” – a reference to Wagner’s extensive recruitment of convicts.

A similar debacle took place the previous day, when military reporters posted geolocated footage of Russian soldiers in the centre of Soledar, claiming the city had fallen. The UK’s defence intelligence confirmed that Russian forces had captured most of the town.

But Prigozhin himself denied those reports. “On the western outskirts of Soledar, there are heavy bloody battles. The Armed Forces of Ukraine honourably defend the territory of Soledar,” he wrote on his Telegram channel.

The battle for Soledar intensified on the night of January 5, when Wagner forces were first reported to have broken through Ukrainian defences. By December 9, Russia’s Rybar news service said Russian forces had encircled Soledar from the northeast, taking the villages of Podgorodny, Bakhmutsky, Krasnaya Gora, and Paraskovievka.

Soledar’s strategic value was low, analysts have said. “Russian forces are still far from being within striking distance of an operational encirclement of Bakhmut,” wrote the Institute for the Study of War (ISW), as they would have to reach two key highways kilometres behind Ukrainian lines.

“Considering that the recent rate of gains in this area has been on the order of a few hundred metres a day, at most, it is highly unlikely that Russian forces will be successful in cohering a mechanised push towards these [areas],” ISW said.

Ukrainian presidential adviser Mykhaylo Podolyak said a victory in Soledar would “not make any sense” strategically for Russia.

“For the Russians there is no strategic goal. It is an open space and our positions are more advantageous. We see a completely irresponsible attitude – to put it mildly – from the Russian elite towards their own military personnel, who are dying there by the thousands,” Podolyak said. 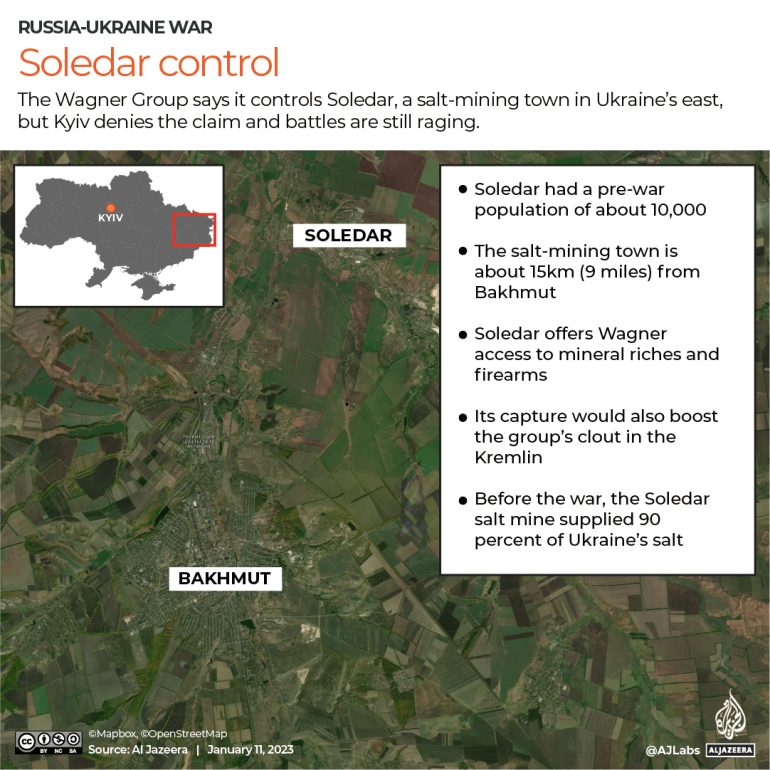 While attention was focused on Soledar, whose fall would be the first Russian capture of a town since Lysychansk last July, Ukrainian troops seized territory further north in Luhansk.

The Ukrainian threat to these towns was a problem for Moscow’s planners, British military intelligence reported, because Russia had also been strengthening its defences in the southern region of Zaporizhia, fearing a Ukrainian counteroffensive towards Melitopol.

“Deciding which of these threats to prioritise countering is likely one of the central dilemmas for Russian operational planners,” a UK intelligence assessment said.

Ukraine’s movement on two fronts led to its successes in Kharkiv, in the north, and Kherson, in the south, last year.

Ukraine has been crying out for more heavy armour, longer-range weapons, and air defence systems to end the war.

President Volodymyr Zelenskyy has judged that political support among allies would not last another winter.

“It is necessary to put an end to Russian aggression this year and not delay any of those defence opportunities that can speed up the defeat of the terrorist state,” he said, referring to military aid.

His military intelligence chief, Kyrylo Budanov, said Ukraine would mount a major counteroffensive in the coming months when winter ended and expected fighting to be “hottest” in March.

“This will happen throughout Ukraine from Crimea to the Donbas,” he said, using the collective term for Donetsk and Luhansk.

The chief of Ukraine’s armed forces, Valery Zaluzhny, said last month that, despite Ukraine’s slender resources, the army planned to capture Melitopol, in Zaporizhia region, in order to reach the shores of the Sea of Azov.

From there, it could effectively cut off Russia from Crimea by firing on the Kerch bridge. But it remained unclear whether Ukraine had reserves of trained manpower and weaponry to do so.

Ukraine received some welcome reinforcements in the 46th week. France said it was preparing to send 50 AMX-10RC light armoured vehicles and Bastion APCs to Ukraine, breaking a taboo on sending Western military vehicles. On the same day, US President Joe Biden confirmed the US will send 50 Bradley fighting vehicles to Ukraine.

The following day, Germany announced it would supply Ukraine with about 40 Marder infantry fighting vehicles and a Patriot air defence missile battery.

“It’s just not serious to say that these numbers will upset the situation … Neither the numbers nor the types of vehicles are sufficient – these are not tanks, they’re light vehicles,” said Lieutenant-General Konstantinos Loukopoulos, retired, of the Hellenic Army, who has taught tank warfare at military academies in Kyiv and Moscow.

“They are enough to equip a little less than two battalions. If the allies really want to secure Ukraine they need to give them ATACMS [long-range artillery rockets], at least another 1.5 million shells of 155mm, and 700-800 tanks,” Loukopoulos said.

Other experts agreed. Retired Major-General Mick Ryan called all three types of vehicle France, the US and Germany are donating “leading edge” with “very good optics and digital communications”, but warned attrition rates in the war are high, and “hundreds of each” vehicle would be needed.

Ryan also pointed out the allies would now have to scale up the artillery, logistics vehicles, and landscaping equipment sappers use in proportion to the armoured fighting vehicles.

Yet, Ukraine’s allies have been holding back. Germany has resisted giving Ukraine its Leopard 2 battle tank, let alone Marders, and France has not donated its Leclerc tanks. Only the United Kingdom was rumoured to be considering a donation of just a dozen Challenger tanks.

“The US has a surplus of 3,000 Bradleys. Why doesn’t it donate them?” asked Loukopoulos. “The attitude towards Ukraine is not entirely honest.”

US former defence secretary Robert Gates and former Secretary of State Condoleezza Rice said time was not on Ukraine’s side.

“For Putin, defeat is not an option,” they wrote in the Washington Post. On the other hand, allowing Russia to keep Donetsk, Luhansk and Crimea to “provide future jumping-off points for renewed offensives to take the rest of Ukraine’s Black Sea coast … whenever they are ready … is unacceptable”, Rice and Gates said.

WHO recommends not using Indian cough syrups in Uzbekistan